Is that a good idea? They provide 100GB of storage and 1G of RAM. I’m just looking for some opinions.

I have successfully been toying around with Oracle’s offering (at least with my own fork) for the past two months… so yes, you can use Oracle Cloud for that.

However, because Oracle is Oracle, they like to overcomplicate everything just for the sake of it, so here’s some stuff you should be aware of:

Reverse DNS. Up to this moment I couldn’t set up that. Their documentation on rDNS is basically not what we want (they don’t mention “what if WE are the ISP?”) - at least for me, though, rDNS doesn’t seem to be a blocker (Gmail doesn’t tag my mail as spam), but I don’t make promises here.

And another real question. Do they block port 25? It’s not blocked for me, but I again make no promises of them not blocking it in the near future. And it might vary from region to region (I’m using the Zurich datacenter).

So there you go. Is it possible to use Oracle Cloud for this? Yes - but it will take more work to configure. But because they offer the two VM’s for free, deploying MiaB on there for personal purposes is worth it, I guess.

Awesome, thank you so much! I’ll look into rDNS compatibility on my own as well, as I’m hoping I can find a solution.

What you provided was much more than a second opinion, thank you so much!

So I have digged on the second page of google (didn’t hit Bing yet - not desesperate enough) - and apparently setting up reverse DNS on Oracle is impossible (without submitting a support request).

Just want to update that a friend of mine IRL has managed to get PTR records (aka reverse DNS) set for his IPs.

Findings:
First, no way to do that alone.

He reported he had to open an SR with support (a neat one - not a chat window!) and they did it for him (in free tier).

Yes expect some waiting, their support is frustrating sometimes, just be clear and they’ll eventually help.

This said, once your trial is up, the support goes *poof*! And with it, any chances on getting that reverse DNS setup. So yeah… Kids: If you want that reverse DNS, ask support for it until your trial ends. (or upgrade your account and be careful enough not to accidentally provision paid features) 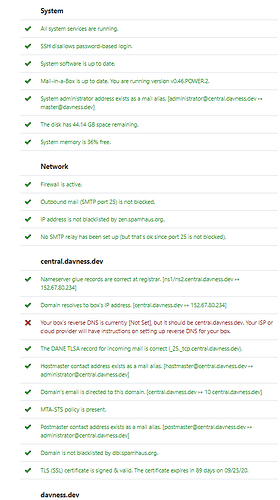 just curious - why did you fork out the mainline MiaB? Any particular home cooked features of interest that you would be willing to share to community?

I can confirm again that you do need to contact support to get reverse DNS set at all. They do, however, say that it is a planned feature to arrive in about a year.

If you want to use oracle cloud’s free tier to host MIAB, be sure to contact their support to get rDNS before your trial runs out.

Nevertheless, as I said, RDNS doesn’t seem like a blocker here. I’m running my box without rDNS and it works fine*

* Fine, as in that it is accepted by gmail

One more thing to add to your top tutorial:

Add @reboot systemctl start firewalld to crontab -e. Without it the firewall wont start and all ports will be blocked.

(Yes I did try to enable it and it didn’t work.)

Just wasted an hour of my life trying to sign up to oracles free tier… 3 times with various issues, 40 chars random password and it flagged an error that my username was in the password, lol, then it didn’t like my debit card… knew I should have just ignored this post

I know their account creation process, is pretty annoying, I spent a couple hours trying to sign up myself, but come on.

And sometimes you get what you paid…

Yeah, I forgot this disclaimer:

For some reason the amount of time it takes to get your account approved ranges wildly. It took two weeks for my account to be actually provisioned.

I guess I’d rather pay a little, 2,99 a month for a reliable service that works, than waste my time with Oracle.

This topic was automatically closed 7 days after the last reply. New replies are no longer allowed.